“This is not the way to run a city, based on threats of violence.”
–Halifax city councillor.

“A recent decision by the Halifax City Council to tear down their own city’s history is but the latest example of a nation eager to dismantle its founders. Mayor Mike Savage and the city councillors who have voted to remove the statue of Edward Cornwallis have betrayed their duty to Haligonians and Canadians.
{The statue has since been taken down…} END_OF_DOCUMENT_TOKEN_TO_BE_REPLACED

“A landmark decision released…by Canada’s top court paves the way for development of the ‘Jumbo Glacier’ resort in the Kootenays region of British Columbia, despite strong objections from the Ktunaxa ‘Nation’.

“The ‘nation’ was fighting the approval of a ski resort in an area held ‘sacred’ to them and had argued that allowing the mega-project ‘Jumbo Glacier Resort’ to go ahead would irreparably harm their spiritual beliefs and practices — a violation of their charter right to religious freedom.
{For the background, see below…}

“The ruling came out before the sun came up over the Ktunaxa ‘Nation’ on Thursday morning, located more than 3,000 kilometres away from the Supreme Court of Canada, in southeastern B.C.. END_OF_DOCUMENT_TOKEN_TO_BE_REPLACED

“Europeans and those from other continents who immigrated legally to Canada and their descendants, have a right to live here equal to that of any ‘indigenous’ person.”

“It is surely time for a serious, non-partisan, open-minded public policy discussion of the subject of ‘indigenous people’ {‘descendants of Siberian settlers’}. I believe there is a very strong consensus that everyone wishes them well; most people acknowledge that the native people have some legitimate grievances and want to address them, and almost everyone acknowledges that official policy in this area has been unsuccessful. And a great many people are tired of the issue and impatient for a change in the ambiance of ever-greater expense and more militantly-expressed native grievances.  END_OF_DOCUMENT_TOKEN_TO_BE_REPLACED

“On Thursday morning {Feb. 23, 2017}, law enforcement entered the ‘Oceti Sakowin’ camp to do a final sweep before officially shutting it down, ending a months-long protest against the completion of the nearby ‘Dakota Access Pipeline’.

“The Oceti Sakowin camp was the largest of several temporary camps on the northern edge of the Standing Rock Sioux Reservation in North Dakota. Protesters have been living on this land for months…

“The ‘North Dakota Joint Information Center’ reports that 46 people were arrested today. Others left the camp voluntarily throughout the day, according to a news release from the center… END_OF_DOCUMENT_TOKEN_TO_BE_REPLACED

December 29th was the 126th anniversary of the Wounded Knee ‘Massacre’, an event that is being portrayed as similar to the Nazis lining up unarmed Jews alongside a ditch and executing them (As in the featured image). However, an eyewitness account tells quite a different story of the unfolding of this tragedy: 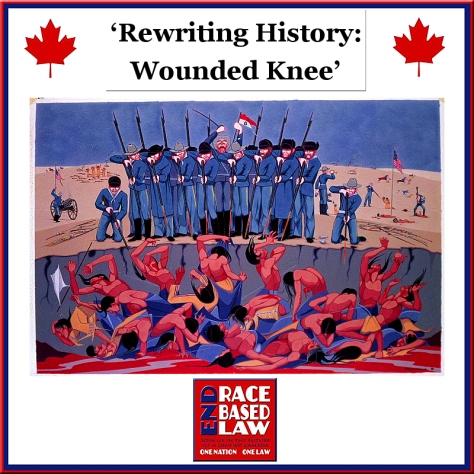 ‘Eyewitness to a Massacre’
“Philip Wells was a mixed-blood Sioux who served as an interpreter for the Army. He later recounted what he saw that Monday morning:  END_OF_DOCUMENT_TOKEN_TO_BE_REPLACED

“From Standing Rock to The Assembly of ‘First Nations’…opposition to pipelines has become a rallying cry, and a hill many political leaders have staked out as their preferred location for death…

“…A few years ago, I visited the Unist’ot’en camp in British Columbia. This camp is located west of Prince George, on the proposed right-of-way of the ‘Gateway’ pipeline. I was impressed by the resolve and commitment of the people who had set up camp and remained for several years. They were creating a permanent settlement within ‘their’ unceded territory.

He conveniently omits the fact that the protest camp is at least partly funded by Vancouver Lower Mainland anarchists and environmentalists, was initially set up to oppose a natural gas pipeline that is also coming through that area, and is NOT supported by the local elected tribal chiefs..:  END_OF_DOCUMENT_TOKEN_TO_BE_REPLACED

“There has been a lot of talk of late about treaties from the protesters trying to block the ‘Dakota Access Pipeline’, with the assertion that the land the pipeline is being built on is land the Sioux people never ceded to the federal government…

END_OF_DOCUMENT_TOKEN_TO_BE_REPLACED

“A young Inuit woman addressed the assembly at the ‘UN Conference on Climate Change’ in Marrakesh…on Canada’s behalf.

“According to the ‘National Post’, the Canadian delegation in Marrakesh comprised 17 representatives from various ‘indigenous’ {‘Siberian settler’} groups.

“Maatalii Okalik, president of the ‘Inuit Youth Council’, accompanied Minister of the Environment Catherine McKenna to the ‘22nd Conference of the Parties on Climate Change’ (COP 22) where she pleaded for the world leaders to take native communities into account.

END_OF_DOCUMENT_TOKEN_TO_BE_REPLACED

{A small minority of Chiefs from across North America FLEW into Montreal and Vancouver for the ‘treaty’ signing. But none of them pledged to stop using oil or oil-based products. And they all still want money from the rest of us, while offering to contribute exactly nothing…}

We are constantly lectured by aboriginal supremacists about how ‘white man’ needs to understand our relationship with ‘Mother Earth’, the way that aboriginals ‘inherently’ do. It will therefore come as a surprise to many that ‘Mother Earth’ as a concept in Canadian culture is European in origin and has virtually no history or connection with aboriginal culture or belief – and that’s according to aboriginal elders and ‘scholars’: 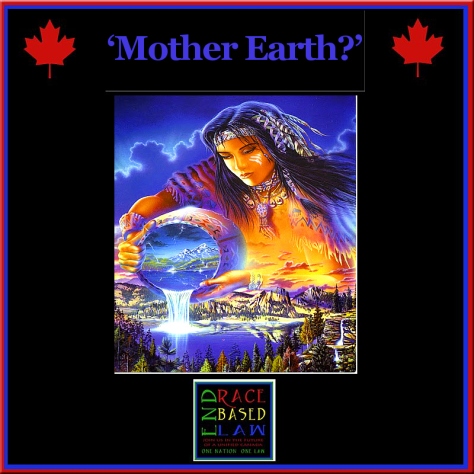 ROGER ROULETTE (“Ojibwe translator and linguist…grew up in Manitoba, the son of a well-known medicine man”):
“Wherever this notion came from, it is widespread. I am at a loss to who came up with it, first of all, and also that they would think that it is our concept. And it isn’t. I am definitely, positively, absolutely sure.”  END_OF_DOCUMENT_TOKEN_TO_BE_REPLACED